The direct effects of MPs on basic physiological functions in model aquatic organisms, and the effects of MPs-associated transfer of POPs were addressed in this research project together with researchers at the department of applied environmental science, Stockholm University. 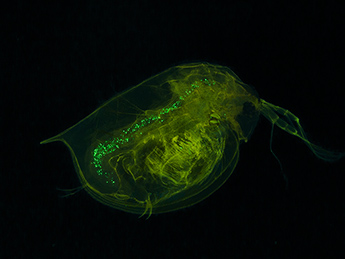 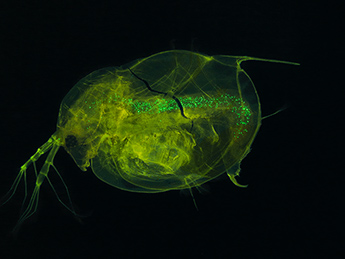 Plastics are a large and increasing component of marine litter, threatening marine life. The degradation of plastics leads to an increased build-up of minute plastic particles in the sea (microplastics – MPs), which can be ingested or passively adsorbed by heterotrophs leading to mechanical obstruction of the gastrointestinal tract and inflammatory responses. In autotrophs, exposure to MPs may hamper photosynthesis and change buoyancy. Moreover, the chemical composition and small size make MPs effective sorbents of persistent organic pollutants (POPs) which may be transferred to biota, enhancing regularly occurring bioaccumulation. Despite these concerns, the impact of MPs and their role as vectors mediating POP transport and bioaccumulation in aquatic food webs is largely unknown. In particular, the net effects of MPs in the food webs have not been addressed in a coherent manner yet, and relative contributions of ecological (i.e. inert particles exerting mostly mechanical disturbance for photosynthesis, food uptake and trophic interactions) vs. ecotoxicological (i.e. particles acting as vectors of contaminants and increasing in situ exposure) factors have not been assessed.

Together with researchers at the department of applied environemtnal science, Stockholm University, we aim to develop and apply an experimental approach for delineating direct effects of MPs on basic physiological functions in model aquatic organisms, and the effects of MPs-associated transfer of POPs. These effects will be examined over several trophic levels spanning from primary producers to top consumers and integrated in a modeling framework.

The results was published in peer-reviewed journals and popular science articles. We have also established contact with several stakeholders including “Keep Sweden tidy” foundation which will communicate our results to the public, an EU-project, FP7 CLEANSEA which involves several European countries and works for a litter-free environment, and HELCOM and OSPAR for whom our results was directly relevant regarding the implementation of the marine strategy framework directive (MSFD) and good environmental status.

Earlier this year, wpd submitted an application to … END_OF_DOCUMENT_TOKEN_TO_BE_REPLACED

Results from IMAGINE, a research project on marine … END_OF_DOCUMENT_TOKEN_TO_BE_REPLACED