AquaBiota can now present a revolutionising, and reliable, method to identify all fish species that occurs in a lake, through analysing DNA from a water sample! This is the first time this is achieved in Sweden. 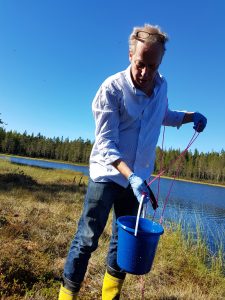 More than 50 Swedish lakes and streams have been investigated and the results compared with earlier exploratory fisheries. The results from the comparisons shows that the new method is considerably more reliable, as it identifies all species accurately, also the rare and elusive species that are not always caught with conventional fishing methods. After the development of the method, AquaBiota has used the method for inventories in Östergötland, Dalarna and Norrbotten.

The method involves analysing the DNA that fishes and other animals excrete to their surroundings, and this DNA is called eDNA (environmental DNA). A considerable amount of international research has been devoted to the method, which is now reliable and efficient. The method to analyse several species within one group of organisms simultaneously is called Next Generation Sequencing (NGS). Also in Sweden eDNA from water samples have been used, but previously species have only been analysed one at a time. AquaBiota is first in Sweden to be able to use NGS for aquatic animals. The development of the current method has been performed in collaboration with the University of Hull (Great Britain) and MoRe Research (Örnsköldsvik).

The new method revolutionises fish sampling and, among other things, entail the following:

The method demands expertise within genetics, molecular biology and ecology to succeed.

Read more about our work connected to eDNA.

Earlier this year, wpd submitted an application to … END_OF_DOCUMENT_TOKEN_TO_BE_REPLACED

Results from IMAGINE, a research project on marine … END_OF_DOCUMENT_TOKEN_TO_BE_REPLACED