The possibility of mapping shallow benthic biotopes using depth data and intensity data (backscatter) collected with mutibeam echosounder (MBES) was examined. The result show a good potential to distinguish between biotopes that can be associated with the soft bottom and biotopes associated with hard bottom. 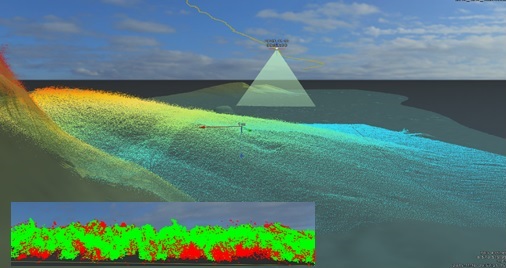 In this study, we explore the possibility of mapping benthic biotopes using depth data and intensity data (backscatter) collected with mutibeam echosounder (MBES). The main focus has been on shallow bottoms where we estimate that the opportunities are greatest due to high resolution in available bathymetric data. Hydrographic surveys have been carried out dedicated to the development of biotope mapping in the archipelago of Stockholm and Gothenburg, and video data describing the benthic environment has been collected in parallel with these. Data from
a hydrographic survey on Brattens deep bottoms in Skagerrak has been used in combination with biotope data from a parallel project on mapping coral biotopes to investigate possibilities on deep bottoms.

The result show a good potential to distinguish between biotopes that can be associated with the soft bottom and biotopes associated with hard bottom. In addition, the prediction for eelgrass biotopes and high vascular plants is largely correct, which is an encouraging first step which, in itself, provides valuable supplementary information to existing spatial models of similar biotopes. The results shows that the method has potential in areas where vegetation is distinctly raised from the surrounding seafloor. On the other hand, the method is currently less suitable for identifying areas where vegetation grows less densely. The batymetric complexity also affects the ability to identify and distinguish vegetation from the other bottom only using hydrographic survey data. 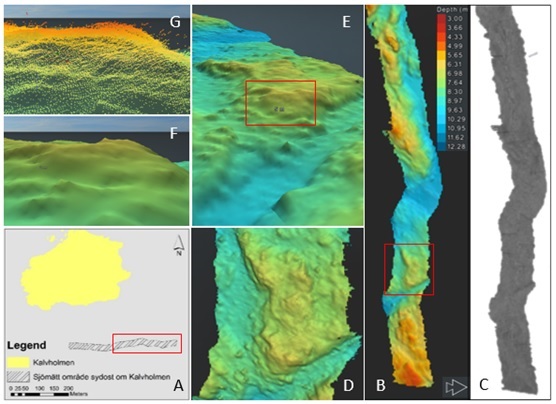 A picture series showing a part of the mapped transverse southeast of Kalvholmen in Gothenburg archipelago (A). Some of the transect is reproduced as digital terrain model (A) and as backscatter seen from above (B). Enhanced detail of the digital terrain model (D), detail is also represented as angled front-facing (E) with detail (F) and as point data (G).

We clearly want to emphasize that the biotope assessment method has both good potential as independent method, and in combination with the type of large-scale modelling that has been implemented in several counties in Sweden. The biotope mapping method complements the large-scale modelling by providing the missing high-resolution benthic environment variables. By combining these modelling efforts, for the first time we should be able to create accurate maps that cover both larger geographic areas and have high resolution! Of course, it requires high resolution hydrographic data, but as larger and larger areas are surveyed with multibeam echosounder there is the potential for such maps to be produced. A prerequisite for this is, however, that data is collected and stored wisely, and it is therefore essential that routines for this is set up.

The project has been carried out in collaboration between AquaBiota Water Research and Clinton on behalf of the Swedish Agency for Marine and Water Management.

Earlier this year, wpd submitted an application to … END_OF_DOCUMENT_TOKEN_TO_BE_REPLACED

Results from IMAGINE, a research project on marine … END_OF_DOCUMENT_TOKEN_TO_BE_REPLACED