Suitable environments for coral and sponges in deep areas of Skagerrak were identified and locations of new surveys were suggested. 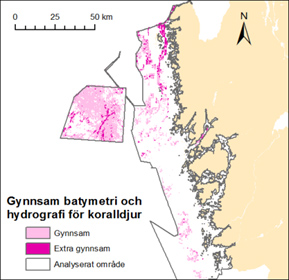 AquaBiota identified suitable environments for coral and sponges in deep offshore areas of Skagerrak. The work, which was performed in 2015 to 2017, consisted of two phases. Phase 1 consisted of literature reviews and compilation of biological, hydrographical and bathymetrical data and phase 2 where the environmental preferences of the species were analyzed and suitable environments for the species were identified and mapped using spatial criteria models. Positions for transects in new surveys were suggested. These analyzes and suggested surveys enable mapping of the Ospar habitats Lophelia pertusa reefs, Coral gardens and Deep-sea sponge aggregations in Sweden.

Earlier this year, wpd submitted an application to … END_OF_DOCUMENT_TOKEN_TO_BE_REPLACED

Results from IMAGINE, a research project on marine … END_OF_DOCUMENT_TOKEN_TO_BE_REPLACED