As part of the environmental impact assessment, AquaBiota has mapped the distribution of Blue mussel (Mytilus edulis) and related these to data on Long- tailed duck (Clangula hyemalis) on the Swedish offshore bank ”Södra Midsjöbanken”. The area has been designated as a potential location for an offshore wind farm in the Southern Baltic Sea. 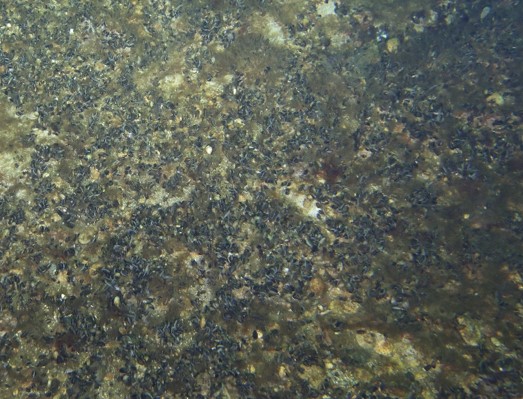 Common mussels at about 25 m depth at the nearby Hoburgs bank.

AquaBiota has produced comprehensive maps of the blue mussel distribution at Södra Midsjöbanken on behalf of E.ON. using data from a survey of offshore banks in 2005 (Utsjöbanksinventeringen) and interpreted data from video films captured in 2011. Comparable data from Hoburgs Bank, which has been produced within another project, enabled analyses within the project to be executed at a larger geographical scale. The results show that the cover of blue mussels does not appear to have changed since 2005, and that the most important explanatory variable for the cover of blue mussels is the availability of hard substrate.

Blue mussels are a very important part of the diet of wintering Long-tailed Ducks (Clangula hyemalis). To investigate if the occurrence of long-tailed duck is related to the distribution of blue mussels, data on long-tailed ducks from 2009-2016 was used. The analyses also showed that Hoburgs Bank was of higher importance for Long-tailed Ducks than Södra Midsjöbanken during the period between 2009 and 2016, which was likely due to the larger availability of blue mussels at a suitable depth at Hoburgs Bank.

Earlier this year, wpd submitted an application to … END_OF_DOCUMENT_TOKEN_TO_BE_REPLACED

Results from IMAGINE, a research project on marine … END_OF_DOCUMENT_TOKEN_TO_BE_REPLACED