In August 2018, AquaBiota performed an eDNA inventory of fish species in lake Båven (surface area 64,2 km²) in the county of Sörmland, commissioned by the water management association in Nyköping (Nyköpingsåarnas Vattenvårdsförbund). Eighteen fish species were found in the lake, including the threatened sheatfish (Silurus glanis) that during the time of sampling had sought out shallower water to reproduce. 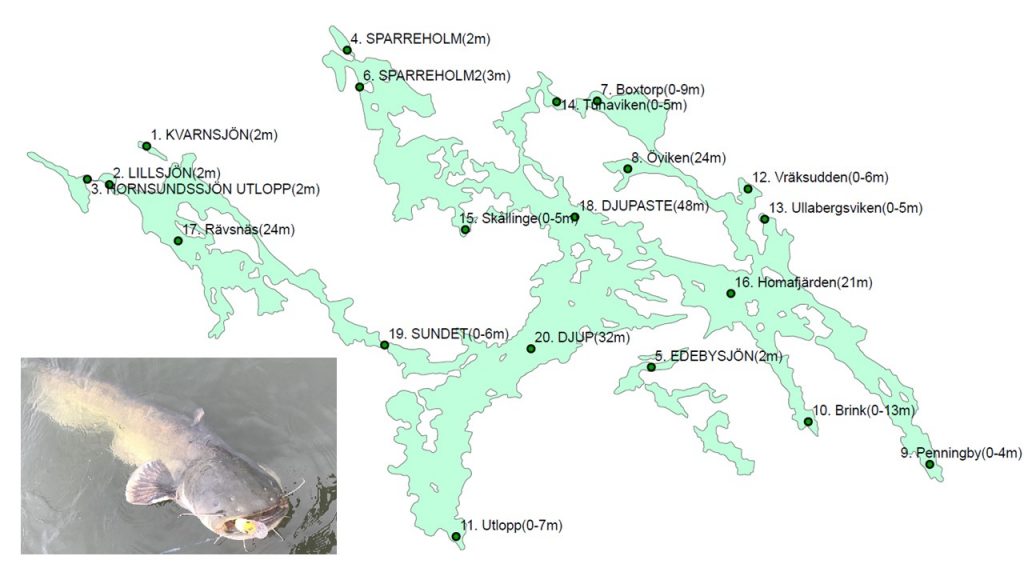 The aim of the survey was to gain an overview of the fish communities in the lake before an upcoming change in the lake outlet in Sibro. The existing dam is planned to be removed, and fish passages will be constructed to allow fish species to migrate, targeting both stronger- and weaker- swimming species.

Water samples from 20 different sites were collected for the survey. In these samples, elusive fish species that are difficult to detect in traditional surveys were found, along with eDNA tracks from bird species and mammals that resided by the lake. The sheatfish was found at five sites (see figure) in shallow depths with temperatures ranging between 19 and 22 °C. The sheatfish is red listed in Sweden and occur in three water systems in the country, of which one of them is Nyköping streams catchment area which includes Lake Båven. The sheatfish is the world’s largest fresh water fish and it can weigh more than a hundred kilos. The protected European eel (Anguilla anguilla) was detected at three sites in north-eastern Båven, as well as by the lake outlet which is a results of earlier stockings by glass eels by the administrative board of Sörmland. Maraena whitefish (Coregonus maraena) was only found in deep waters, indicating that the species preferring low temperatures move to colder and deeper waters when the surface water temperature rises.

Aquatic environmental DNA (eDNA) is used for inventory of aquatic organisms. The method is based on the fact that all living organisms continuously leave genetic prints in the environment in forms of mucus, faeces, sweat and dead cells. eDNA can be extracted from s few liters of water, and through molecular analyses reveal which species occur within an area. The method is non-invasive as the target species do not need to be seen or handled. As eDNA is short lived in aquatic habitats, it gives us a snapshot of species presence.

Earlier this year, wpd submitted an application to … END_OF_DOCUMENT_TOKEN_TO_BE_REPLACED

Results from IMAGINE, a research project on marine … END_OF_DOCUMENT_TOKEN_TO_BE_REPLACED