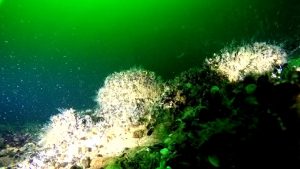 Using drop-video AquaBiota has investigated the conservation values at Klints Bank east of Gotland. The number of occurring species was very limited and the dominating organisms were blue mussels and hydrozoans. Mussel beds occurred at 40% of the stations, and were more common in shallower areas where hard substrate occurred to a greater extent.

The investigation was undertaken as a part of the project Marine conservation values surrounding Öland and Gotland, where the County Administrative Boards of Gotland and Kalmar is cooperating with the Linnaeus University to increase knowledge of the marine conservation values for use in ocean spatial planning and creation of marine reserves. On behalf of the County Administrative Board of Gotland AquaBiota investigated the benthic environments at Klints Bank, located 20 nautical miles east of Gotlands Östergarnsholme. The investigation focused on documenting epibenthic species, substrate and habitats, but also occurring mobile species were noted.

The results from the drop-video illustrated that the areas’ principal benthic conservation values appear to be connected to blue mussels (Mytilus edulis). 20 of the investigated 50 stations contained mussel beds, i.e. had a cover of blue mussels of more than 10%. The mussel beds were more common at shallower depths. The number of occurring species was very limited, and apart from blue mussels only hydrozoans, the bryozoan Electra and the crustose red alga Hildenbrandia were noted. In addition to the sessile organisms, mobile species were also recorded: Three species of fish were noted – rock gunnel, short-horn sculpin and cod – and two species of mobile crustaceans – the isopod Saduria entomon and mysids.

The bottom substrate in the area was dominated by sand, gravel and small stones, with some elements of large stones and boulders, and the larger sediment classes were more common at shallower depths.

In conclusion, the shallower south-west part of Klints Bank is assessed to be most valuable due to the common occurrence of mussel beds.

Earlier this year, wpd submitted an application to … END_OF_DOCUMENT_TOKEN_TO_BE_REPLACED