Due to the salinity gradient and low biodiversity, the Baltic Sea is particularly sensitive to climate changes. There is a risk that climate driven changes in temperature, ice cover, salinity and water levels will negatively impact the distribution and condition of species, habitats and ecosystem services. 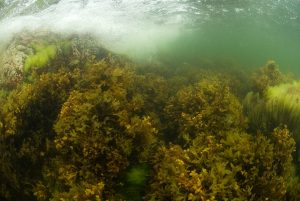 In a new article in Diversity and Distribution we use a species distribution model for bladderwrack in combination with models regarding dispersal, connectivity and population dynamics to predict the distribution of bladder wrack under future climate conditions.

The models show that the distribution of bladderwrack is expected to decrease drastically, mainly due to decreasing salinity. There is also a risk that the climate change will move with such a speed that locally adapted bladderwrack, that is tolerant to low salinities, will not be able to keep up due to restricted dispersal potential. A decreased distribution of bladder wrack in the Baltic can have considerable consequences for biodiversity and ecosystem functioning, as the species is the only large habitat forming species on hard substrate in large parts of the Baltic.

Earlier this year, wpd submitted an application to … END_OF_DOCUMENT_TOKEN_TO_BE_REPLACED

Results from IMAGINE, a research project on marine … END_OF_DOCUMENT_TOKEN_TO_BE_REPLACED