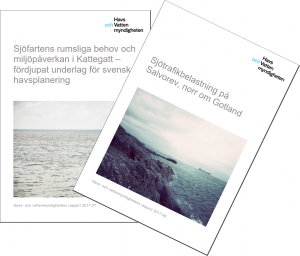 Shipping may impact marine conservation values in many ways. These two reports describe the current situation of maritime traffic in Kattegatt and at Salvorev, north of Gotland, and the impacts of the expected changes in traffic are investigated in terms of conservation values and shipping spatial needs. The reports are produced by AquaBiota Water Research and SSPA on behalf of the Swedish Agency for Marine and Water Management.

The investigation in Kattegatt analyses the current maritime traffic in comparison with the expected traffic after the implementation of the suggested new route systems. The report also describes the known conservation values within the affected areas of Kattegatt, and the potential impact of shipping on the values is identified. The investigation indicates that the suggested new route systems will contribute to increased shipping safety, which also is positive from a conservation point of view, as many of the conservation values are very vulnerable to oil spills. Additionally, it is recommended that the possibilities to decrease maritime noise should be investigated, and that previously investigated areas are monitored to evaluate if there are any effects from the changed shipping routes.

The investigation at Salvorev focuses on the changes that are expected when the shipping route that passes between Hoburg’s Bank and Gotland is no longer in use, and how this may affect the conservation values. The investigation describes the current maritime traffic in the area and estimates that it will increase from 2 000 to 16 000 ship passages per year if the route at Hoburg’s Bank is redirected to the route west of Gotland. This is expected to increase the risk of groundings and collisions, and through this severely increase the risk of negative effects on the conservation values in the area by increased risk of oil spills. Particularly seabirds, that may also be disturbed by the increased number of passages, are considered to be especially sensitive.

Earlier this year, wpd submitted an application to … END_OF_DOCUMENT_TOKEN_TO_BE_REPLACED

Results from IMAGINE, a research project on marine … END_OF_DOCUMENT_TOKEN_TO_BE_REPLACED